Humanity can do better

Is your longing for a better world growing stronger? A world with more focus on well-being than on profits. With more bottom up synergy, and less hierarchy. Are you meeting more and more people who want to make a difference, just like you? If you are not sure how or where to start, we can help. With a community, tools and all kinds of support. And you can start right now, by reading and signing the Declaration, or just continue reading this page. 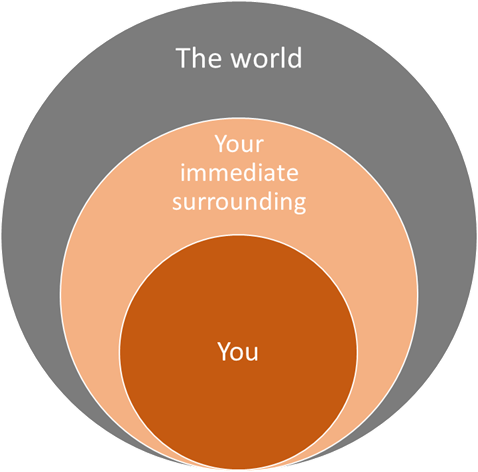 Why a Great Citizens Declaration?

Moving from government overreach to a more direct democracy

Throughout history governments have often taken decisions that are not in the best interest of humanity. Numerous examples have shown that the courses governments take can lead to disastrous outcomes, such as in the World Wars. At the Great Citizens Movement we believe that it is possible to optimize decision making with a different decision making structure: a form of direct democracy. An example could be holacracy, a fractal like way of organizing whereby the mission and vision are leading. In the Great Citizens Declaration we declare that it is important to take into account the needs and wishes of all people on earth, instead of governments and a few (wealthy) families and deciding how to live our lives.

This will enable sending positive ripple effects throughout the world. As you can influence your immediate surrounding in a positive way and if many people do this, this will be felt in the world as a whole.

What is the goal of the Great Citizens Declaration:

The goal of the Great Citizens Declaration is to enable a future in which it is the main goal to stive for the best version of people and the planet. Main values that fit this goal are: Freedom, humaneness and wisdom. The idea is to make use of (academic) discoveries that support this aim.

What is needed to achieve this?

A shift in mindset and behavior is needed to achieve the best possible world we can imagine.

For instance, it seems important to go from:

Creating and connecting on a level and scale that suits you

This can be achieved via various positive psychology challenges, such as ‘letters to the future’ whereby each and every one of us gets to write about his or her ideal future world. Via Great Citizens statements and ‘pledges’ each person on earth is given the chance to make changes that he or she thinks may work to make the world a better place.

A ‘Great Citizens pledge’ is a personal statement that describes what you will do in the upcoming time to make the world a better place and to get closer towards the ideal world you have in mind. It is up to you on which scale you want to do this, if you want to connect to others, champion ideas that others can join, it is all up to you and what you feel comfortable and energized about to do. Depicted in the figure as a circle. 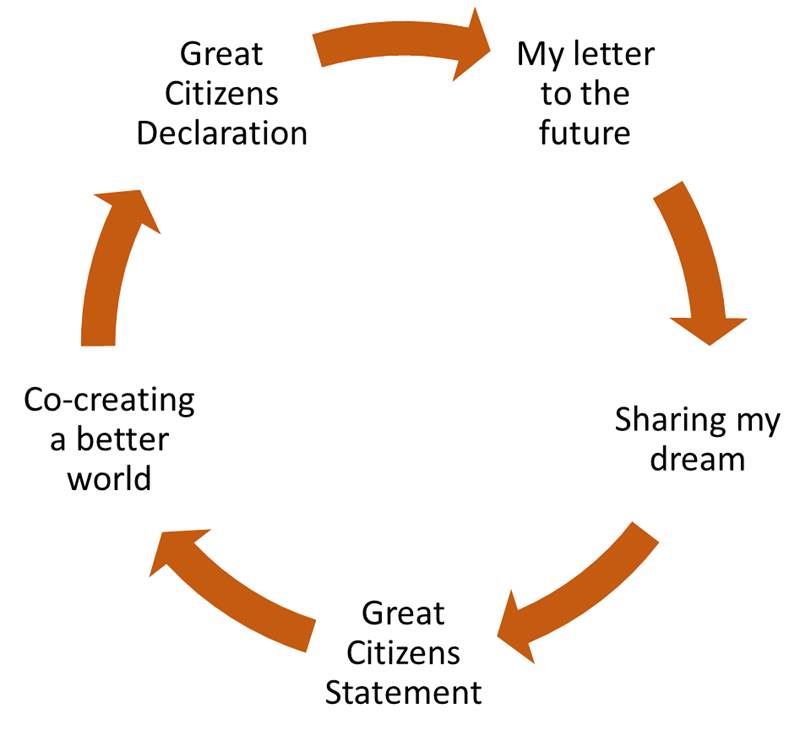 not to change others

If you are a citizen of the earth that is interested to unlock the human potential without many constraints, or if you think things could be organized differently, do consider to co-sign this signature. Also, if you believe that we can do a better job for humanity to thrive and flourish, as this is the main aim of the Great Citizens Declaration (GCD).

Should I agree with every sentence in the declaration?

It is probably not possible to write a declaration that everyone agrees with for 100%. The idea is to have a general statement that people agree with the tenor, rather than with every single sentence. Ideally, people would take this as a roadmap to formulate their own Great Citizens Statement. This can be done via “Letters to the Future Challenge” (https://ikigaitv.nl/).  In this challenge, everyone can dream about their ideal future and formulate a plan accordingly. This can be done individually, but also in groups, for instance in your own neighbourhood.

If you agree with The Great Citizens Declaration, please support the declaration by signing it:

How can I get involved?

Signing the Great Citizens Declaration can be a first start. The idea of signing is not to give it to politicians and ask them to change their ways. This has been done by many people and instances, but so far in vein. Rather, we think that if many people sign this declaration, this will act as a landmark and watershed that separates the era of actions and structures that were not always in the best interest of men, of the arising era of flourishing, well-being and meaning in life for all humans.

If you want to be part of the movement, have a look at the rest of our website.

What will happen next?

We aspire a Great Citizens Movement of citizens that share a dream of changing the world today and recreate the world according to values that serve humanity and the planet, rather than deplete human beings, the planet and all living beings. The idea is a purposeful life for all. Thus, we will not offer the signatures to governments or institutions, it is just a sign that many people want change and are agreeing that we humanity can so better. After participating in ‘letters to the future’ we may realize that we do have the power to change things for the better. Let’s start today and make this happen! 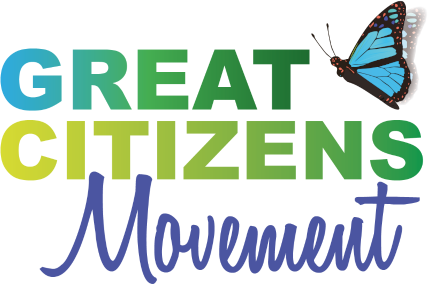